Using MIL-HDBK-1823A methods with Field-Finds can lead to gross errors in POD.

Why is this not such a great idea?

Field-finds are the most detectable cracks in a given size range, since those are the ones your inspection found. It is irresponsible to use these most-detectables to represent all of the cracks because you will grossly over-estimate your inspection’s capability, claiming, for example, 90% POD when the true detectability is closer to 50%.

The statistical properties of Field-Finds are radically different from Probability-of-Detection (POD) demonstration specimens. MIL-HDBK-1823A methods require that you know the entire population of cracks to be inspected. So even if a crack is missed in a POD demonstration, its size and other characteristics are known because it is a laboratory specimen. Special methods (censored regression) can then be used with known misses to determine the \(\hat{a} \textit{ vs a}\) (signal vs. size) relationship, and from that the POD(a) function.

But with field-finds you know what you found, but you don’t know what you missed. So the methods of ordinary regression and censored regression cannot be used because their underlying requirements are not satisfied.  Thus, using MIL-HDBK-1823A methods to analyze field-finds from an unknown population of cracks will grossly over-estimate Probability of Detection for field inspections.  This is illustrated in the following figures. 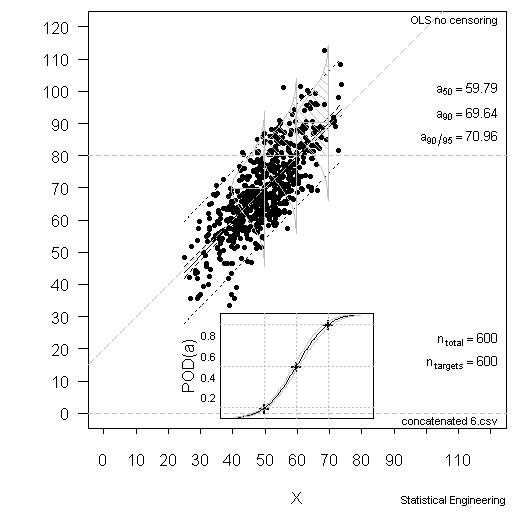 These values are “correct” and are based on all 600 observations. 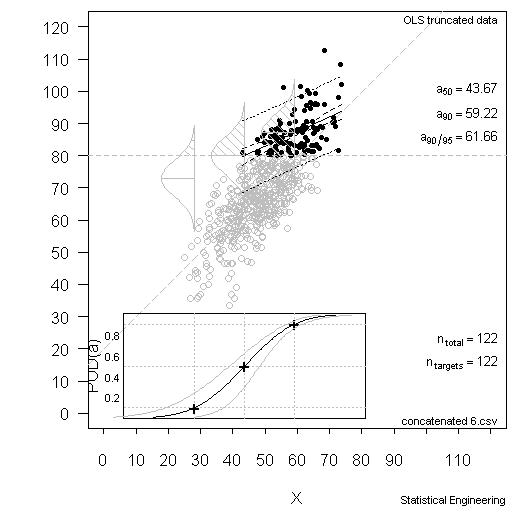 The data in gray are unknown. Since only the observations above \(\hat{a}\) = 80 are known, they pull the left side of the line sharply upward because the data that would otherwise pull it back into place are not known. Furthermore, since a considerable fraction of the data is missing, the observed \(\hat{a} \textit{ vs a}\) scatter appears much smaller (probability densities in Figure 2) than it really is (Figure 1). The POD based only on the “finds” produces these results:

In other words we are 95% confident that the inspection will find about half the cracks of size 62 or larger, not 90% of them.  This offers a partial explanation of why inspections whose capability is (erroneously) based on field-finds still experience large misses when inspecting future field-service parts.

There are several things to keep in mind:  The data that are plotted in gray in Figure 2 are unknown to the analysis. They cannot be used, as in Figure 1, because they are known in Figure 1 but unknown in Figure 2.  Furthermore, censored regression can’t work either because the cracks that were not found were not known to have been missed, which is a requirement for censored regression (see MIL-HDBK-1823A, Appendix G “Statistical Analysis of NDE Data”).

The sky is not falling, of course.  Field-finds can be used as NDE specimens but they require special statistical methods to do that.  I can help you and your enterprise analyzed field-finds correctly and avoid dangerous over-estimation of your system’s capabilities.